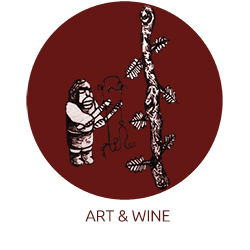 The idea of ​​EZOTERIK is about the deep and complex feelings of life. And there will not be a single wine. We will see in time a family of extraordinary, special, unexpected elements and that is why they must be seen and understood as a series of initiations and rituals. And the first step is this wine.
EZOTERIK PRIMO is the first piece of the EZOTERIK collection. A mysterious and surprising sweet Chardonnay, from the 2012 vintage (a difficult year, with low production and hot summer, which led to the wilting of the berries in the bunches), bottled with special care for only 876 wooden boxes, containing special glass bottle.
Its complex bouquet surprises with clear shades of vanilla and lightly burnt oak, which overlap the intense aromas of candied fruit. The gustatory impact highlights fine accents of lemon, saffron or sweet oak wood. It's a spectacular wine!
The particle "Primo" comes from the beginning of the series, and in the ones that will appear later, the number at the end will change.
The wines from the EZOTERIK series will be launched in association with special moments (natural, historical, social, etc.) - as is now the connection with the spring equinox, which represented its appearance - a time when the length of night and day are perfectly equal, in maximum balance.
The EZOTERIK box is the protector of a code consisting of three elements of reflection, three magic-drawn circles, where the individual mirrors himself during life. They are the guardians of the wine inside the bottle.
The motto EZOTERIK is: "In the day we die / in the night we fly". Knowledge is the opposite of what you have been taught so far: Day-Light is the host of our progressive / everyday death, and Night-Dark is the realm of flight, dreaming and freedom.
A dual skeleton-bird character will be the embodiment of man in the three representations. Depending on the light-dark period, one of the halves becomes dominant. The balance will be extremely difficult to achieve, because the two parts of us, the bird and the skeleton, are inseparably united.
The concept of the wine and the image belong to the artist Ciprian Paleologu, the wine creation of Liviu Grigorică and the oenologist Veronica Gheorghiu. 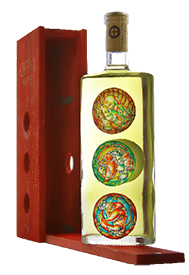